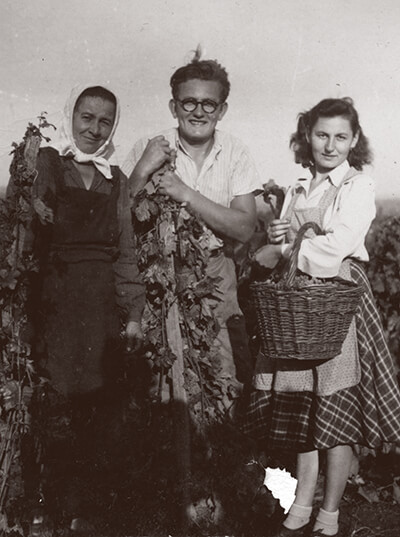 As a “visual memoir,” Proud & Torn tells the story of the ups and downs, over generations, of an everyday peasant family from the Hungarian countryside. The digital project features nearly a thousand images, many of which have never been publicly viewed before, alongside graphic maps and drawings, to make the complicated story of Hungarian and Eastern European history accessible to anyone, from children to adults.

Proud & Torn features Bettina Fabos’ own Hungarian family’s photographs and stories about their lives. The project also includes stories and photos of other Hungarian citizens and historical figures. To craft the timeline-based story, Fabos worked closely with two historians, Drs. Leslie Waters and Kristina Poznan, who helped construct the narrative over sixteen chapters, from 1848 to 1956. The history reveals the dramatic and often horrific events that led one family—like Hungary itself—to be irreparably torn: two world wars, the Holocaust, and more than a century of instability with competing regimes of autocracy, fascism, democracy, and communism. 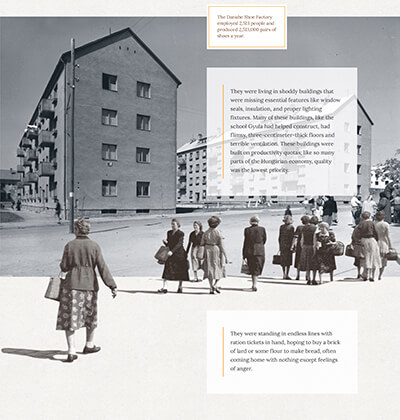 Traditional Hungarian histories are about public figures and life in and around Budapest. They typically emphasize Hungary’s “great states and statesmen” (to use late historian Howard Zinn’s term), focus on nationalism and national mythmaking, and extol the lives of the privileged and the powerful. This is the history portrayed by the National Museum in Budapest: an endless parade of noble Magyar men, with just two women allowed into the narrative - the Habsburg Empresses, Maria Theresa and Elizabeth. These prominent figures, and the historical discourses that perpetuate their significance, dominate the way we understand Hungarian history.

Proud & Torn breaks free of these rigid national narratives, amplifies the voices of women and historically marginalized peoples, and uses digital tools to illuminate alternative narratives. We situate readers in Marcali, a small farming town in western Hungary near Lake Balaton, which is marginal in the Hungarian national imagination but a telling window into the past. Rural Hungarians were the main actors in their country’s agricultural success. They were also the first to be targeted for conscription into both wars. During the Holocaust, it was the significant populations of rural Jews and the Roma, living in and around small towns all over Hungary, who the Nazis and the Hungarian Arrow Cross rounded up first. Under communism, rural Hungarians were also the chief subjects of the regime’s ruinous agricultural policies. One cannot understand Hungary unless one also understands the lives of people in the countryside. 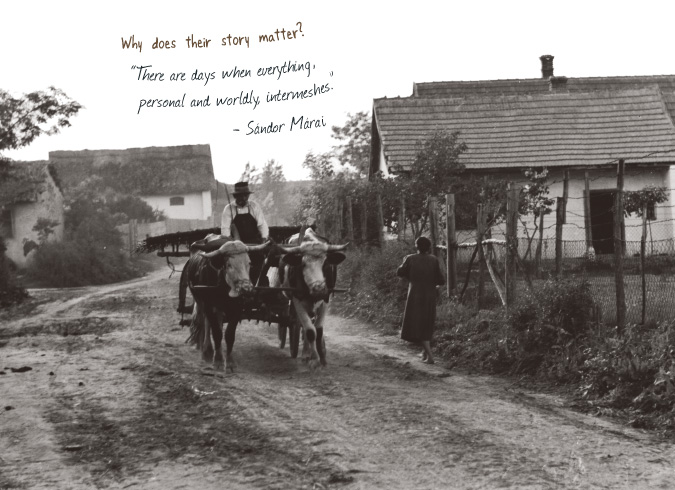 At its most personal level, Proud & Torn traces the lives of sister and brother Ari and Gyula Fábos. Their story—dramatic to American ears, sadly typical for Hungarians—is helpful in that it resides resolutely in the middle of the larger narrative of Hungary’s economic growth and modernization, nationalism, and social struggles. They were neither consigned to poverty, nor privileged as nobility. They were not flag-waving Magyar nationalists, but were relieved of being an oppressed minority ethnic group (e.g., Germans, Slavs, Jews, Roma). They were enemies of the state—enough to be tortured—but not enough to be killed. From the middle perspective of the Fábos family, we have explored and measured the extremes of Hungarian society. And, from the perspective of this family with a sister and brother of similar age, we have explored the expectations and limitations of gender in Hungary as well.

To illustrate this story, we have carefully chosen a vast assortment of photographs that we have altered, isolated into parts, put into animation, or crafted into photomontages. We have limited our use of the most conspicuous and iconic photographs because these images, compelling as they may be, are ultimately limiting our interpretation of history. We’ve relied instead on alternative visual sources to document rural Hungary, including: the Fábos family’s own collection of photographs; the photographic collections of the Hungarian Ethnography Museum; the Fortepan digital archive of amateur photography, and the fascinating collection of images from the newsletter Magyar Rendőr (from the Hungarian Policeman Photo Archive). The newsletter documented the mundane procedures of policemen and their (mostly rural) subjects in communist Hungary. These images tell us a richer, more complicated history than the simple suggestion of a few iconic images. 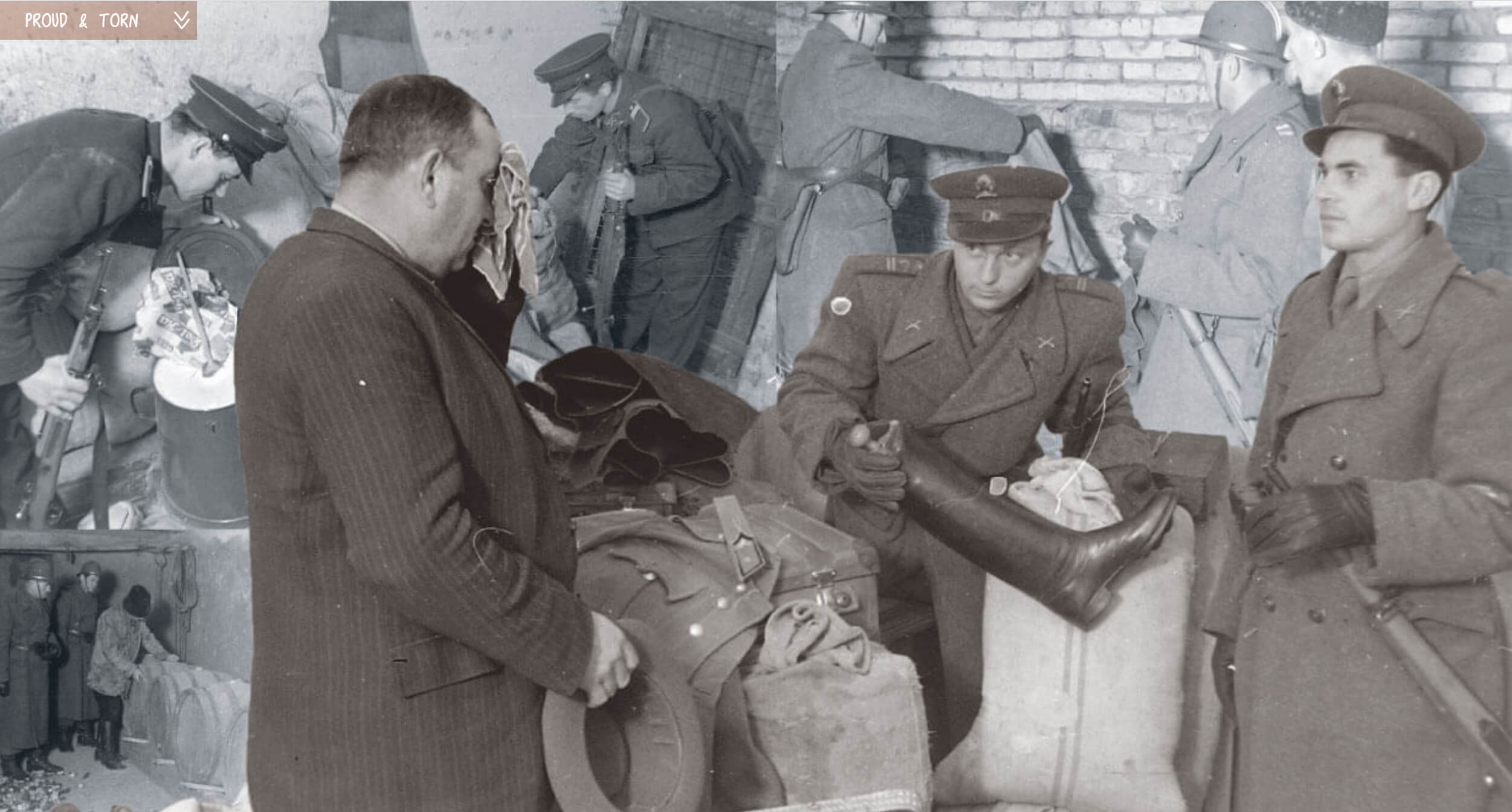 Dana Potter designed Proud & Torn to resemble a personalized scrapbook. She turned Bettina’s own handwriting into a font to identify the passages that appear in her voice and designed quotes to float in like pieces of paper cut out of a newspaper and arranged by hand. She added white boxes trimmed with orange to designate factual asides that are interesting and helpful (but not critical to the narrative), and she used two duotone styles, one blue and one brown, to simultaneously unify the faded colors of old photographs and give slight contrast between adjacent photographs. 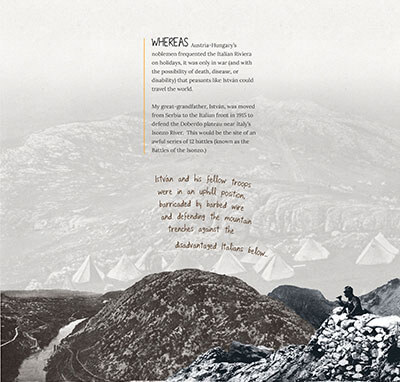 Our development team (Collin Cahill and Jacob Espenscheid) coded these elements as parallax layers so they seem to float in a three-dimensional space, creating a feeling of depth. Perhaps Proud & Torn’s most striking feature is our numerous horizontal scrolling panoramas scattered throughout the project, starting with the timeline interface. This huge collage represents each of the project’s Prologue, sixteen chapters, and Epilogue. It was a massive undertaking on everyone’s part, but especially Dana’s, who designed it to be over 30,000 pixels wide. We grouped the images on three separate layers that each move at a different speed. Making sure our horizontal panoramas are satisfying experiences on any screen has been a thrilling challenge that is as dependent on its design as it is on its code. 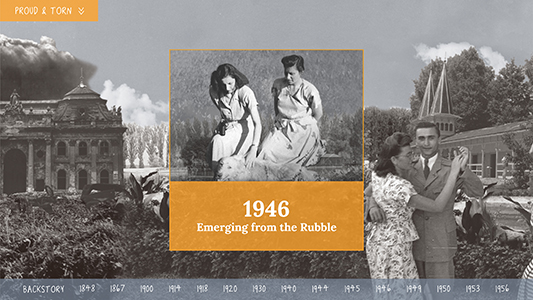