BYthe 1930s, Pista had invested years of sweat and labor into the farm, and claimed it as his own personal kingdom. The family raised about 150 pigs, 20 milk cows, 20 beef cattle, five horses, too-many-to-count chickens, ducks, geese, sheep, pigeons, cats, and dogs ... 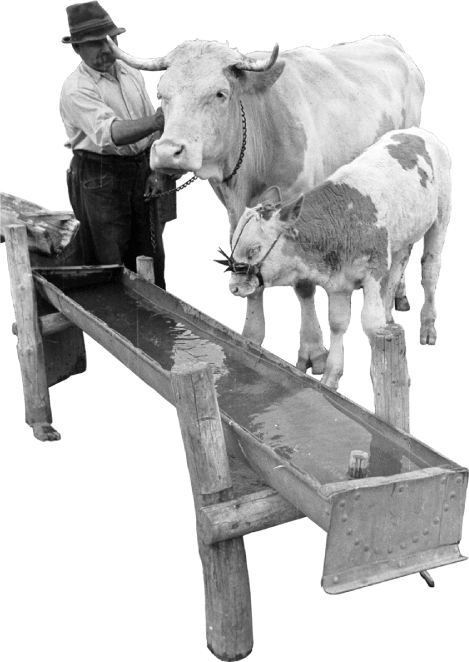 Pista and his hired helpers planted six kinds of grain (plus a lot of alfalfa and clover), nine kinds of fruit trees (apple, pear, cherry, sour cherry, plum, walnut, almond, peach, and apricot), plenty of berry shrubs and vegetables, and of course grapevines for white wine. 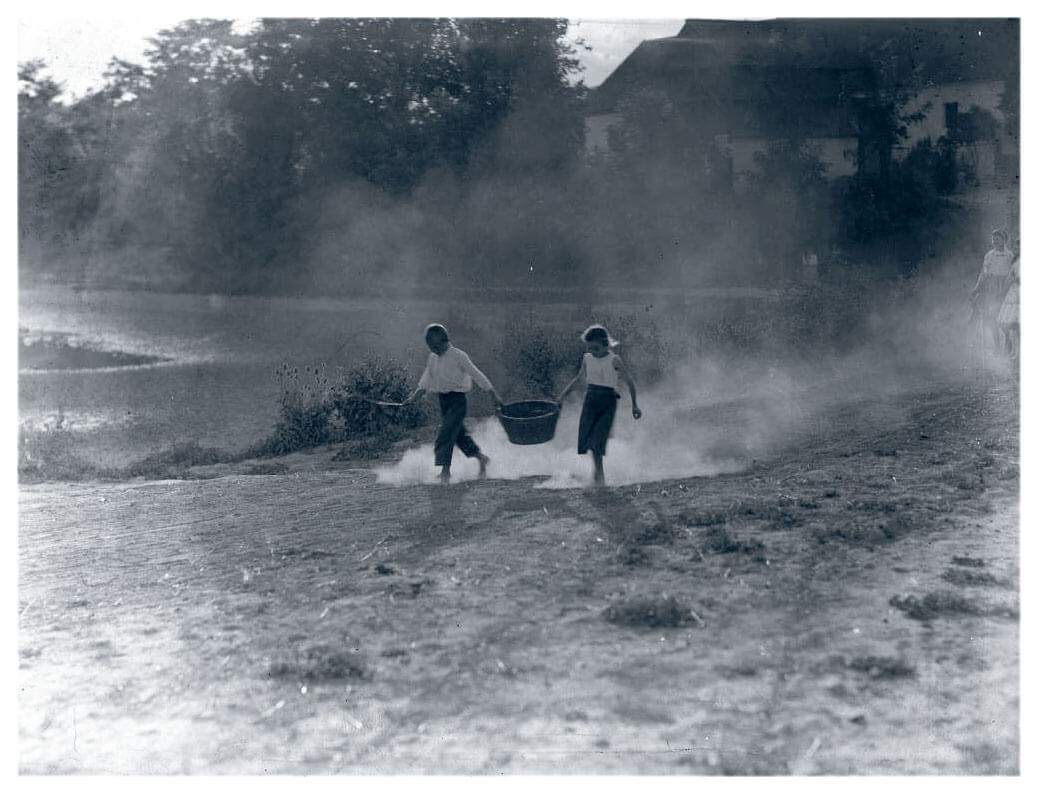 The world was combatting a global depression, but Ari and Gyula had plenty to eat on the farm—pörkölt, gulyás, and plum dumplings, pantries filled with smoked meat, churned butter, cream... 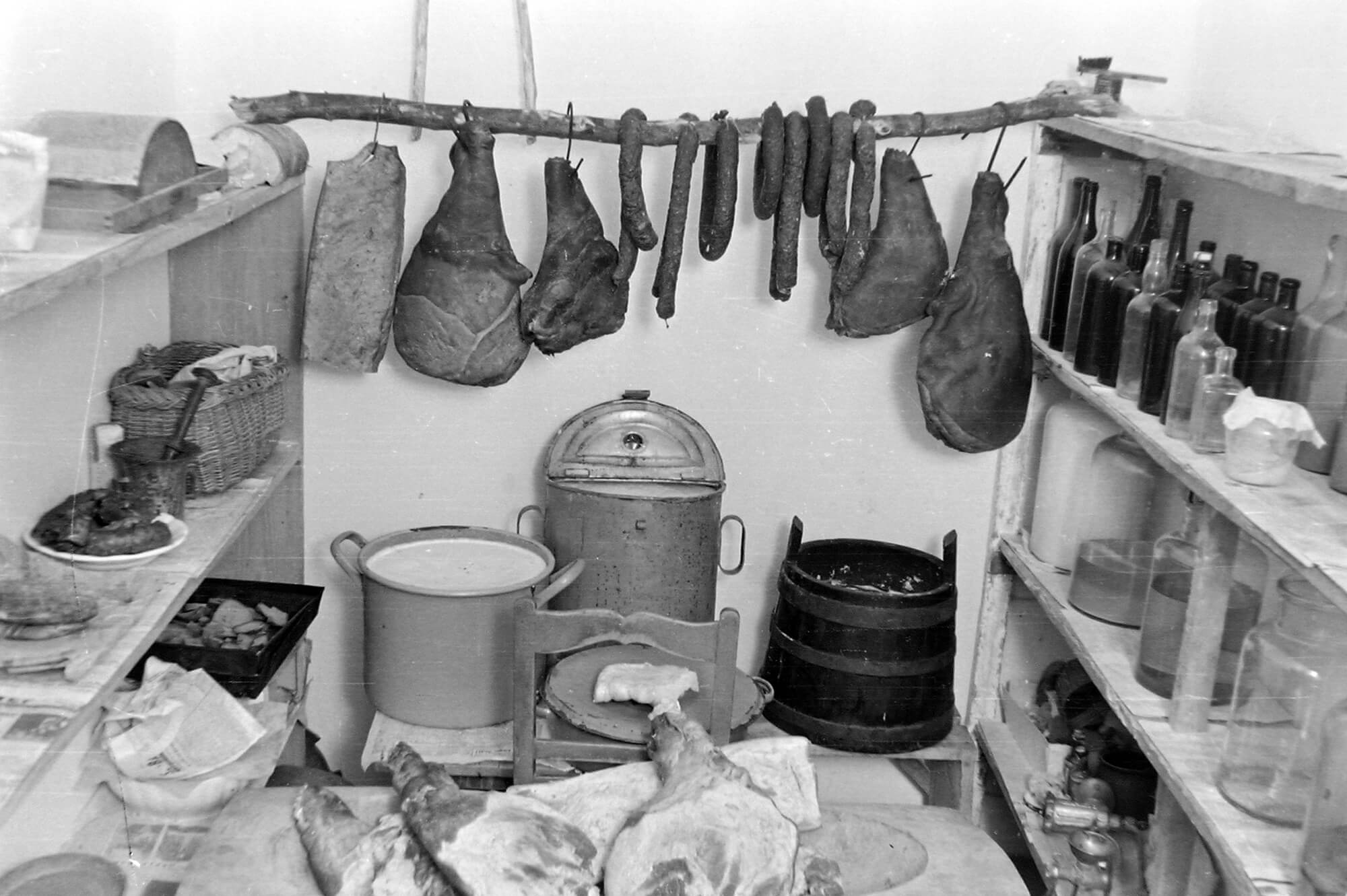 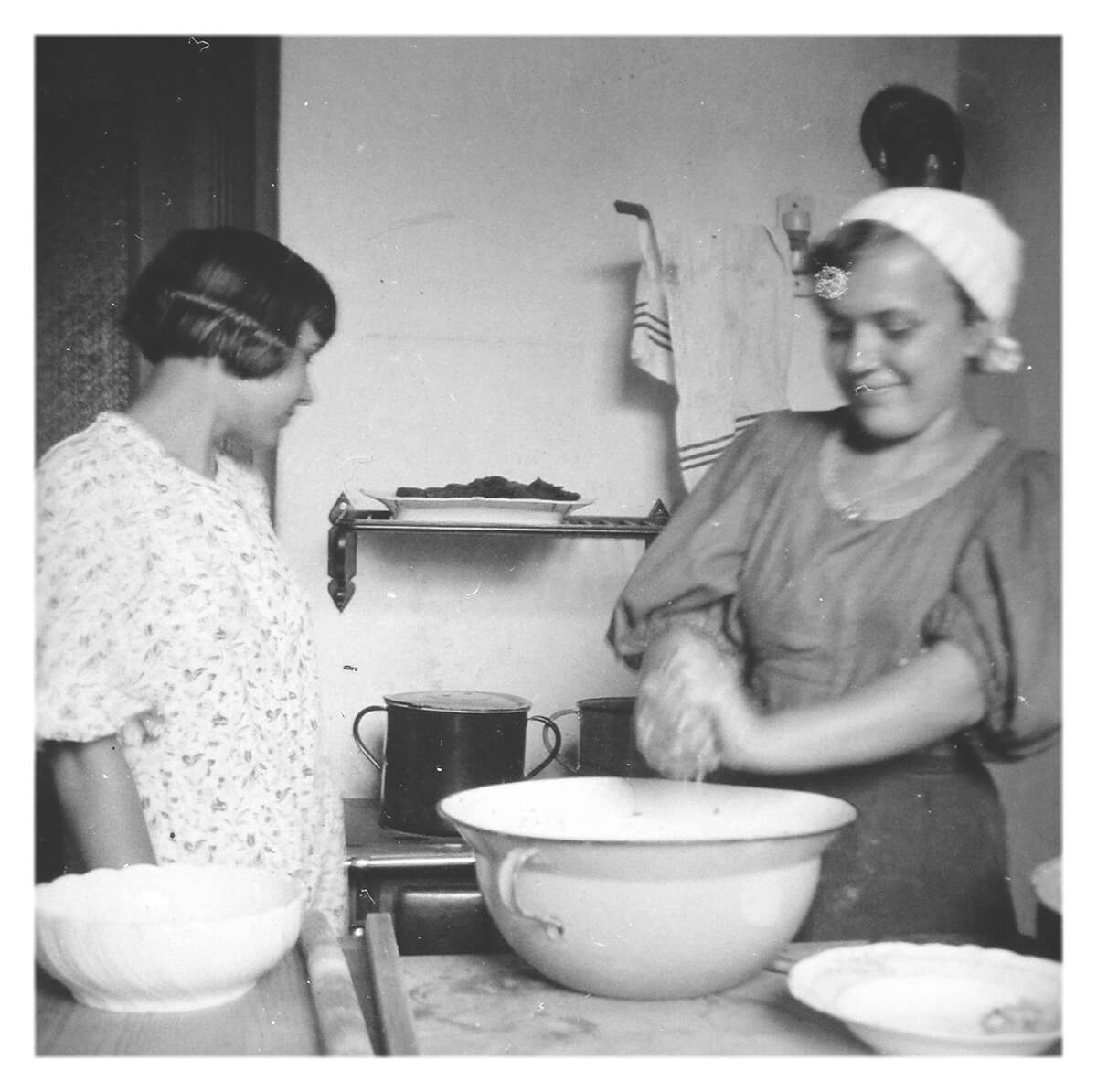 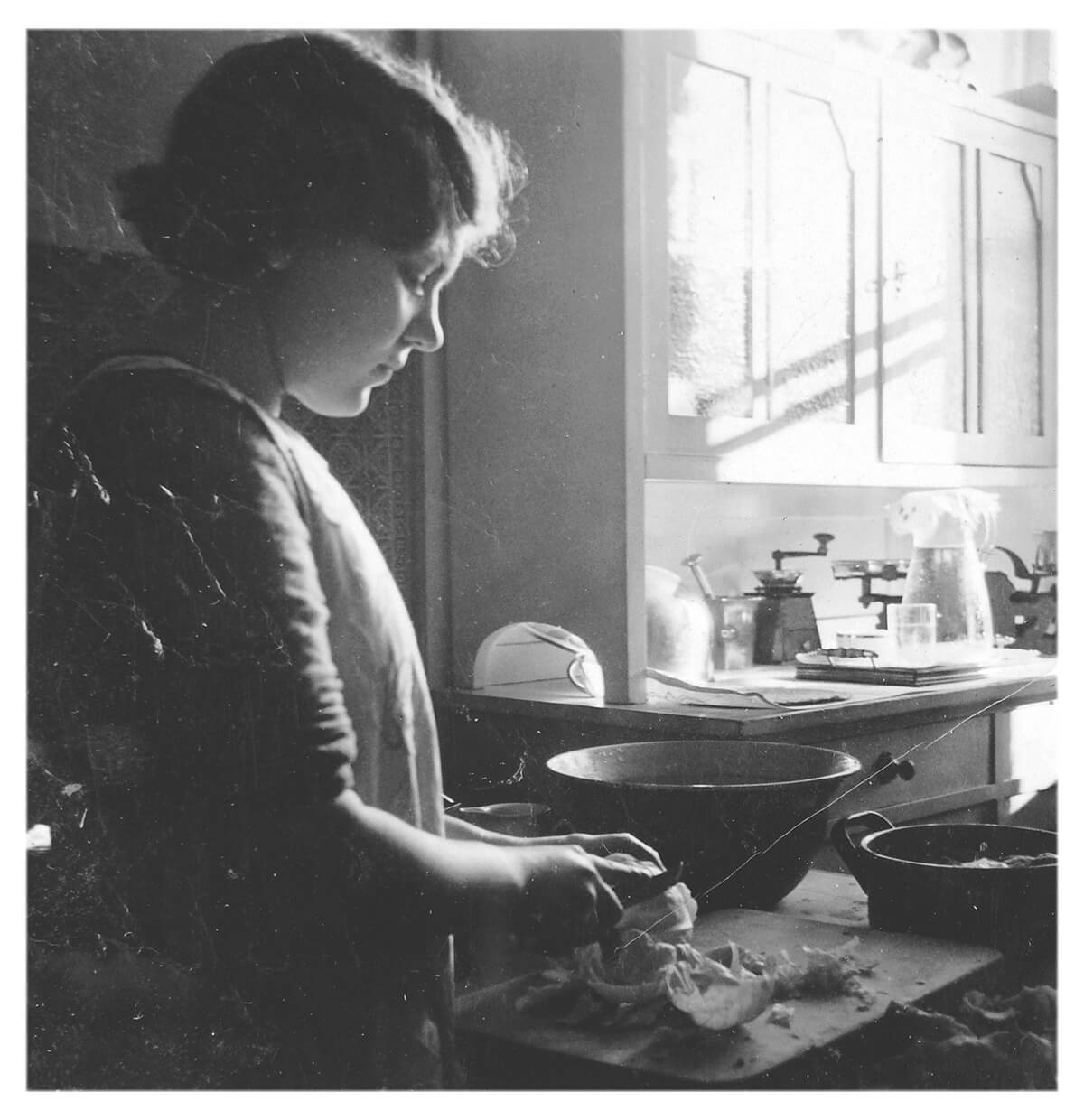 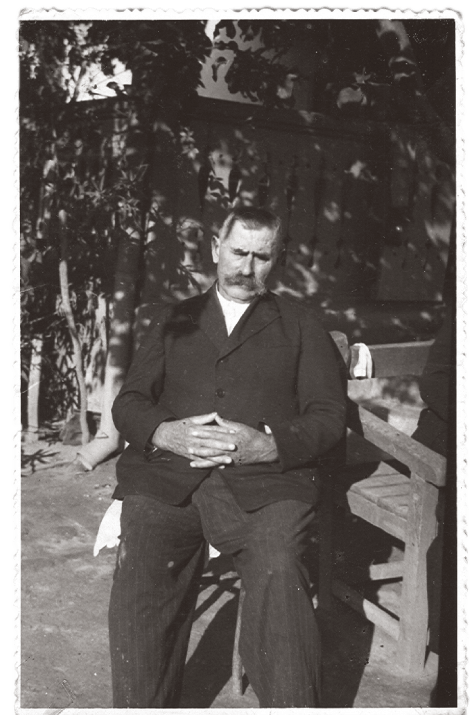 My father, Gyula, is especially nostalgic about his boyhood “playground” and the long Sunday walks he took with his doting (and still shell-shocked) grandfather István around the family property while the women, including Ari, cooked Sunday dinner.

My father was 11 pounds (five kilos) at birth. My grandmother, Gizi, was fairly small, and here was this massive baby boy! Gyula was groomed to take over the farm and follow in his father Pista’s footsteps. 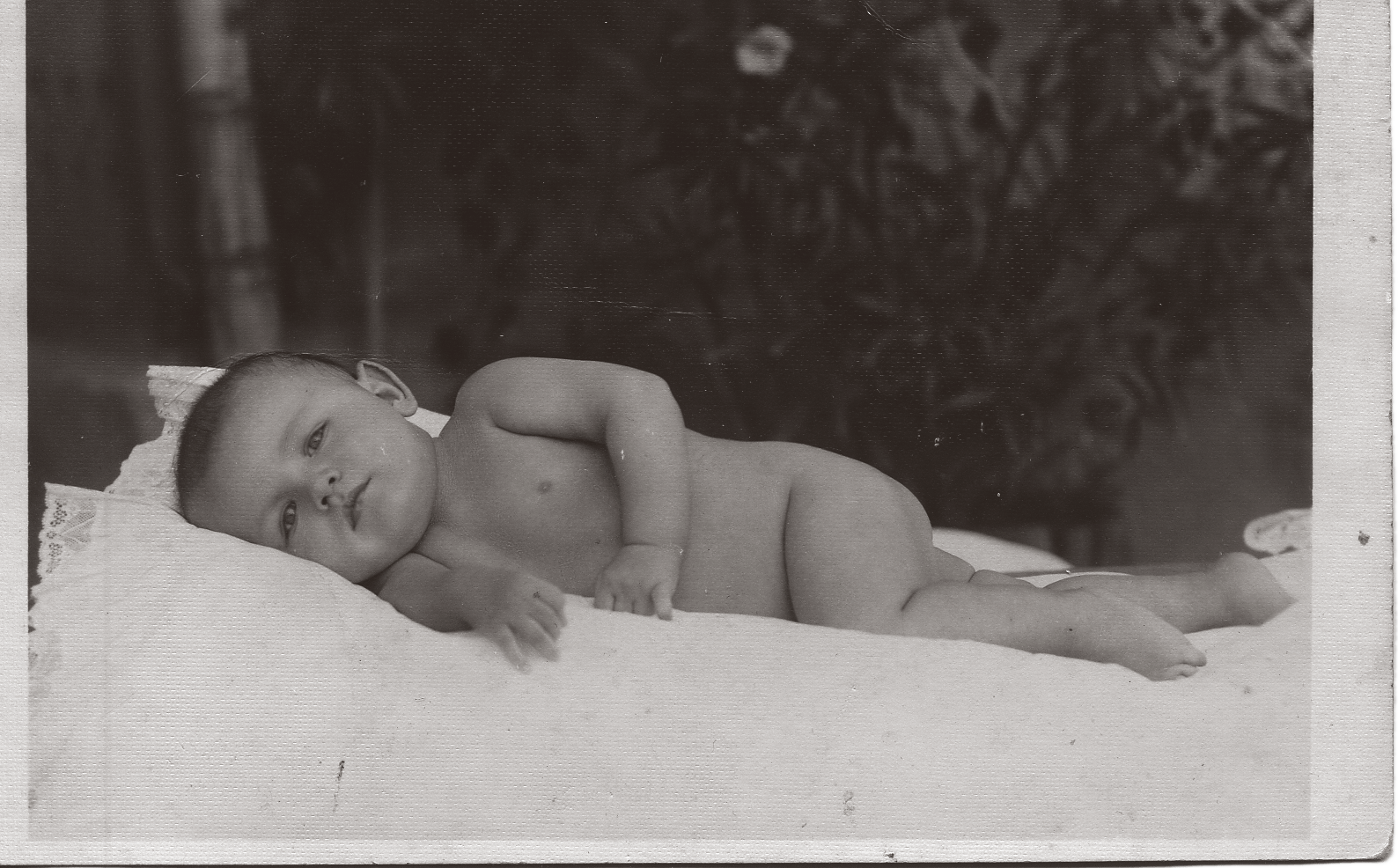 Gyula’s babyhood (and not his sister’s) was documented by a studio photo. Why? Perhaps they were celebrating their male heir. Perhaps he was their favorite. Perhaps their parents hadn’t yet caught their breath after losing their first two baby girls (Ilona, in 1927, at 3 weeks, and Jolán, in 1929, at 3 months) to colic-like conditions that are easily preventable today. But Ari turned out healthy, and so did Gyula. Now it was a happy family of four.

ASthis farm and this family rose in prominence around Marcali, Hungarians were making a mark in the sporting world, especially in figure skating. 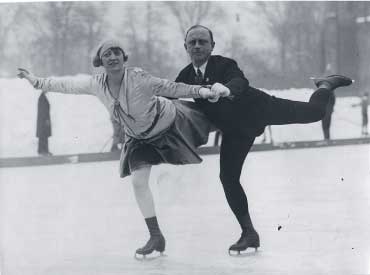 Their victories provided a symbolic narrative of ascendancy for a country that had been shamed and shrunk into a landlocked state by the Treaty of Trianon.

Instead of imagining a new kind of Hungary, however, Hungary’s leaders charted a return to an idea of the old Hungary and made some foolhardy alliances that put the nation, my family, and even many of Hungary’s star athletes on a dangerous, tragic trajectory.

ONEof these leaders was Gyula Gömbös, who Regent Horthy appointed Prime Minister the same year my father, Gyula, was born.

Gömbös admired Hitler and Mussolini and thought he, too, would make a good totalitarian dictator one day. Like his political allies, he was obsessed with "Old Hungary."

A decade after Trianon, the idea of reversing the treaty and reinstating Hungary’s “1000-year-old borders” was omnipresent, to the point that children were required to sing a song about it every day at school:

IS NOT A COUNTRY,

I BELIEVE IN ONE GOD.

I BELIEVE IN ONE MOTHERLAND.

I BELIEVE IN THE RESURRECTION OF HUNGARY." 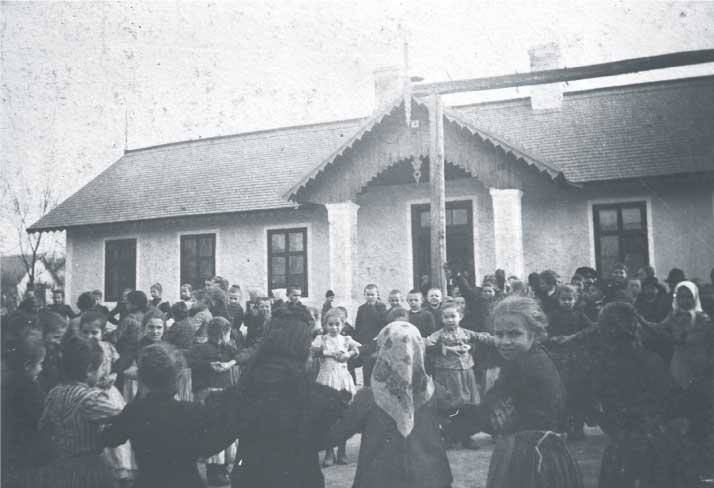 But Gömbös’s Hungarian mythmaking was contradictory.

On one hand, he wanted Greater Hungary, which had been famously multi-ethnic. On the other hand, he wanted a pure Hungary—with Magyars reigning the land as they supposedly did during Árpád’s time. If you recall, Gömbös was active during Horthy’s White Terror and had helped establish some venomous anti-Semitic organizations. Hungarian Jews, the Roma, Hungary’s Slavic populations—these people, according to Gömbös and his followers (many of whom were vocal right-wing university students) didn’t belong in the “real” Hungary.

The new German dictator and his Hungarian protégé re-asserted the former alliance between Hungary and Germany from the Great War ...

SOON,Hungary was furnishing Germany with: 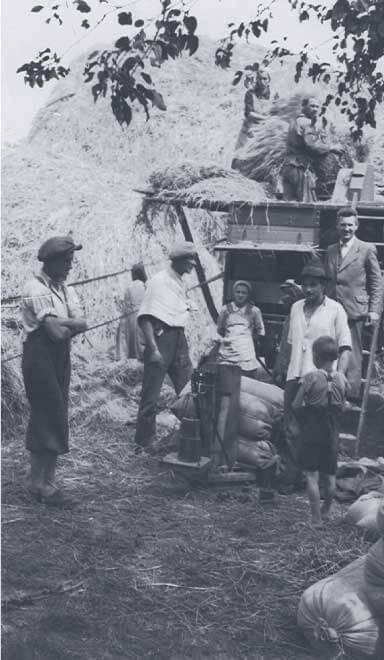 MYgrandfather Pista’s steam-powered threshing business became so profitable that he was able to buy a second threshing machine. He also developed his own seed selector machine, adding another layer to the enterprise, which moved from farm to farm, served the whole farming community, and depended on 25 to 30 extra workers. 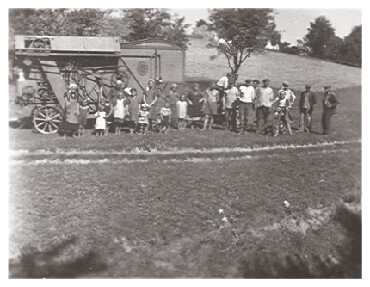 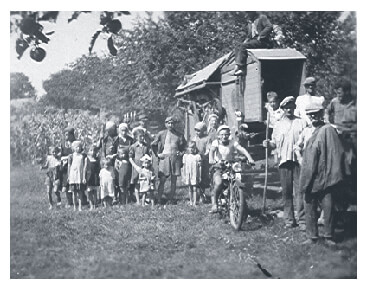 UNFORTUNATELY,Hungary’s location in Central Europe put it directly in the path of two of the world’s worst dictators in history. Not only was Hungary in close proximity to Nazi Germany, with Hitler consolidating his power after 1933 ...

... but to the east was Joseph Stalin’s Soviet Union.

Because of men like Horthy and Gömbös, Hungary leaned towards Germany. There was the economic relationship. There was the promise that Germany would help Hungary regain its lost borders. There was the right-wing disdain for Soviet-style communism. And there was Hungary’s own homegrown anti-Semitism.

Hungarian pro-German extremists formed the Arrow Cross Party in 1935, modeling it after the Nazi Party and using the ancient cross of the early Magyar tribes as their insignia.

GERMANY was a rising economic and political power in Europe, which was showcased at the 1936 Summer Olympics in Berlin. Hitler believed that excelling in international sporting competition was a sign of national strength and a great piece of propaganda for the Nazi Party. Hungarian leaders believed this too.

The Germans were exceptional, as Hitler fully expected. But the Hungarians were a surprising sensation, winning gold after gold. 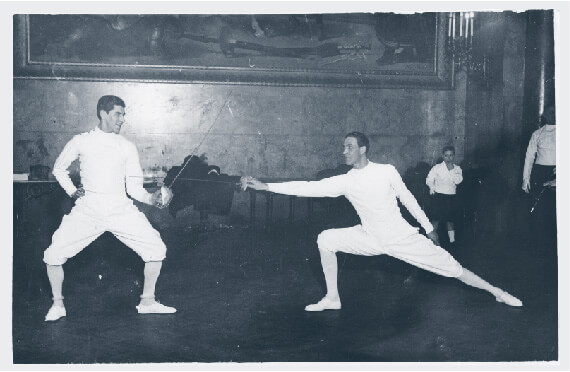 Endre Kabos won the men’s individual sabre (he was Jewish). 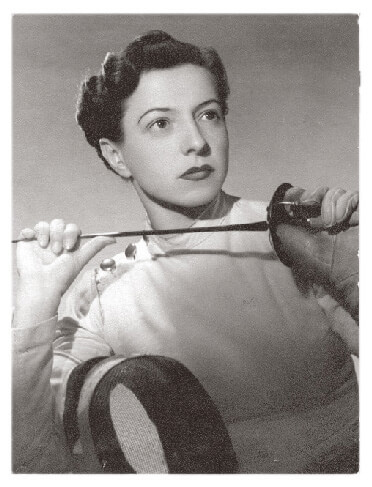 Elek shared the Olympic medal stand with Helene Mayer (Germany—silver medalist) and Ellen Pries (Austria—bronze medalist). All three of these incredible fencing women were half Jewish, which must have given Hitler fits.

Mayer, a statuesque blonde with a Christian mother, had stayed in Los Angeles after competing in the 1932 Olympics, and was the one token Jew on the German team (a public relations ploy to stave off a potential American boycott). On the podium, she was compelled to salute, an athlete completely trapped by her circumstances. 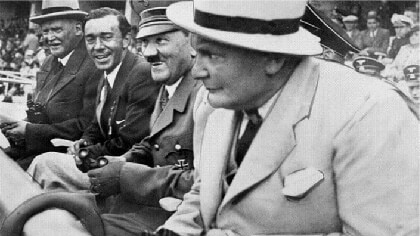 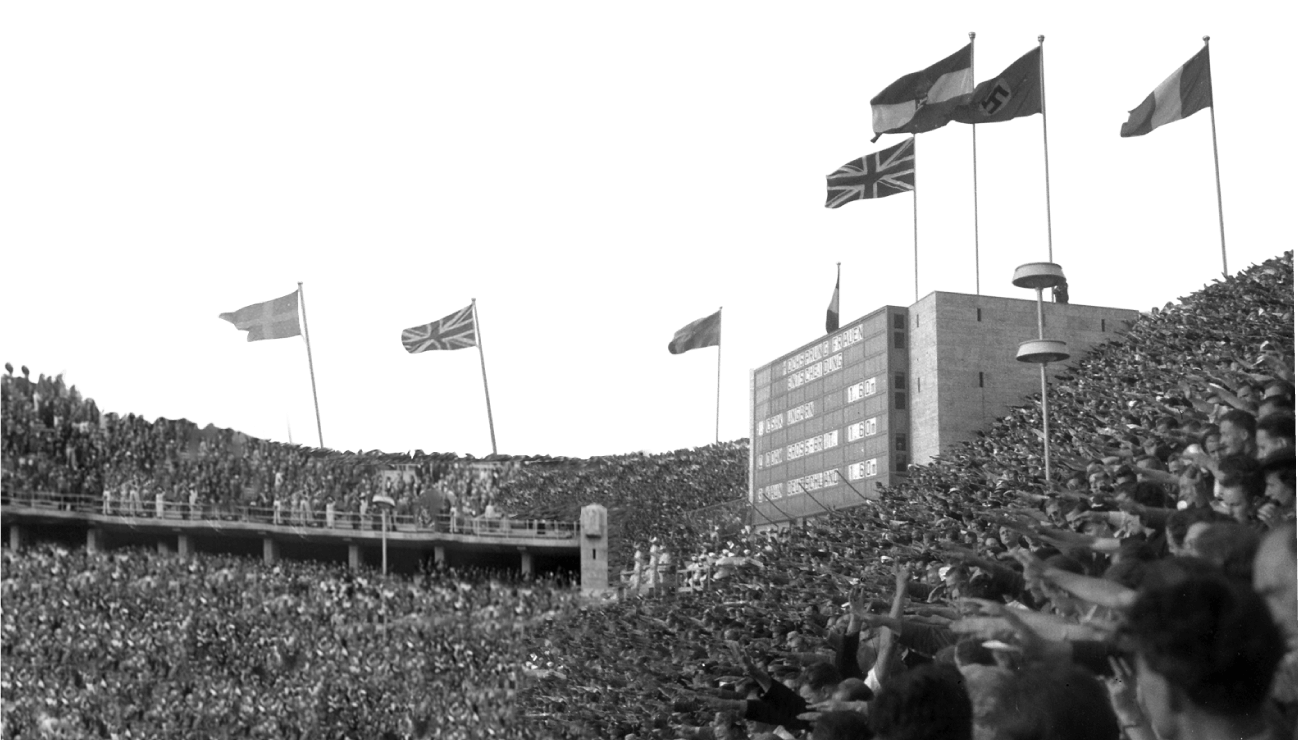 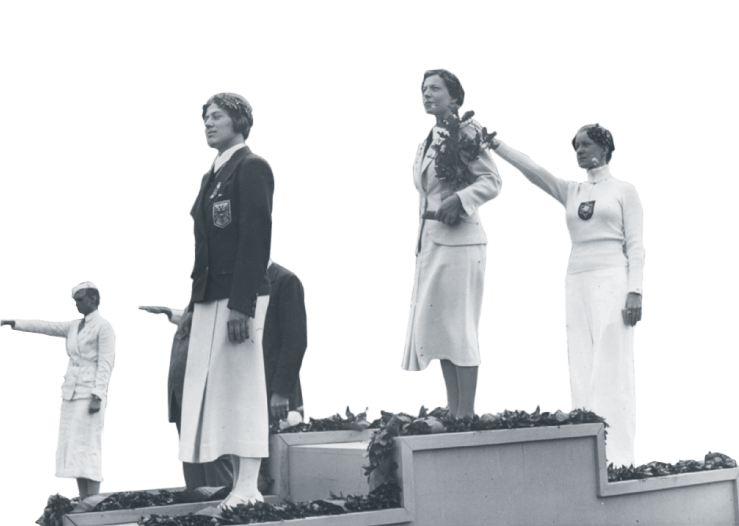 THESoviet Union boycotted the 1936 Olympics, refusing to compete alongside “bourgeois capitalists.” The country was descending into chaos as Stalin’s “Five Year Plan” forced millions of farmers to merge their land into giant collective farms. 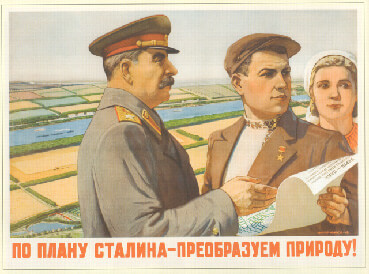 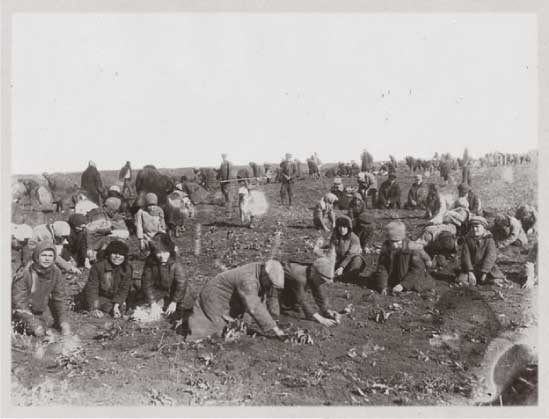 ARE TO BE ELIMINATED

ARE TO BE COMBINED

IN A SINGLE LAND MASS!”

Collectivization led to another catastrophic Soviet famine (1932-1933), similar to what had happened during the civil war when Lenin’s anti-kulak campaign severely disrupted food production.

Stalin’s Five Year Plan called for absurdly impossible grain quotas. Any farmer who did not meet the quota was branded a “tight-fisted” kulak. The general plan, ultimately, was to eliminate kulaks as a social class—millions were killed or sent to forced labor camps in Siberia (where they were unlikely to survive). A lucky few managed to escape to the cities. But Stalin got what he wanted: the state now controlled the food supply and the capitalist peasant system was broken. 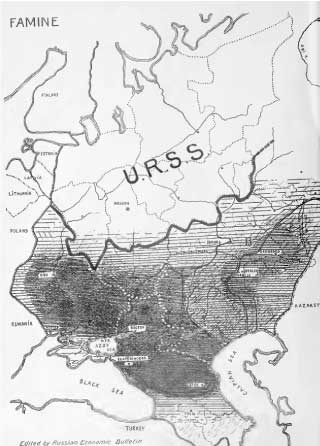 Stalin executed anyone who threatened his power: a contingent of astronomers because their sunspot development research was “un-Marxist”; meteorologists who failed to predict the weather; composers whose music was not “politically correct.” He then purged people who had purged other people. This nightmarish period was called, aptly, “The Great Purge.”

TOthe west of Hungary, Hitler annexed Austria in March 1938 and the Sudetenland in Czechoslovakia a few months later, blithely thumbing his nose at the Treaty of Versailles. Many Hungarians looked on, admiringly. Could Hitler help them dismantle Trianon and facilitate Hungary’s resurrection as well?

The Treaty of Versailles had forced Germany to accept responsibility for the Great War, disarm, make substantial territorial concessions, and pay reparations to certain countries.

This was a “friendship” with dire consequences. Hitler dangled the prize of Greater Hungary above Horthy and his government. In return, Horthy and his ministers implemented policies friendly to Germany, including increased anti-Jewish legislation, as they tried to gain Hitler’s favor.

The so-called First Anti-Jewish Law (not counting the 1920 Numerus Clausus) was passed in May 1938, and limited the number of Jews in commercial enterprises, medicine, engineering, law, and journalism to 20 percent. This threatened the livelihood of thousands of Hungarian Jews.

Perhaps not coincidentally, Horthy and his government received the “First Vienna Award” from Hitler in November 1938. It was the first border change since Trianon, and it gave Hungary back a section of territory they called Felvidék, meaning “Uplands,” from southern Czechoslovakia. 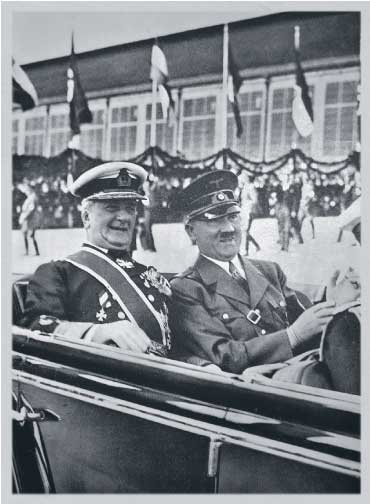 “ONCE AGAIN THE LIGHT

OF GLORY SHINES UPON YOU

FROM THE HOLY CROWN!”

TO A CROWD IN KASSA 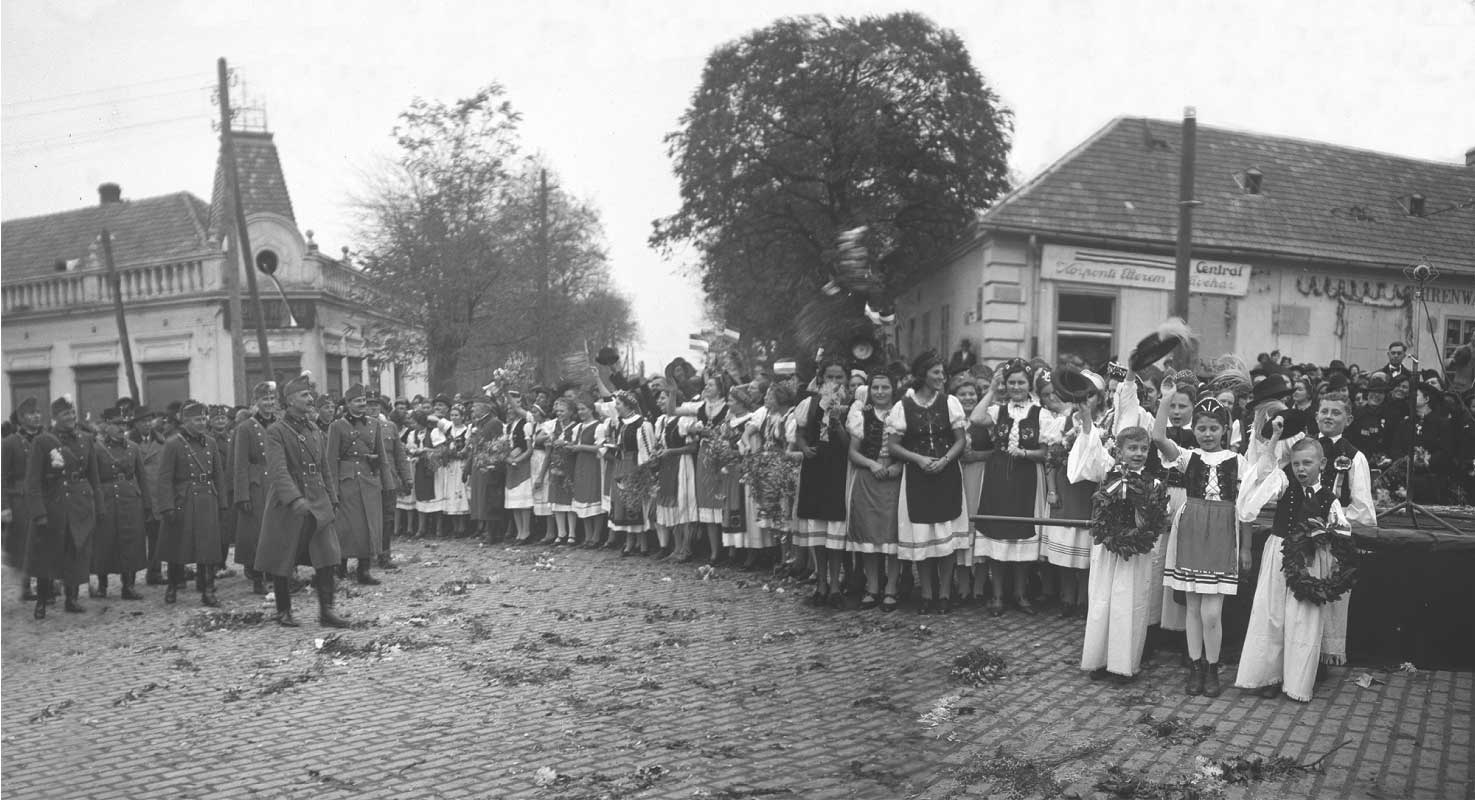 Kassa was wildly sentimental because it was the city of Ferenc Rákóczi, who had launched the first anti-Habsburg war of independence in 1703. 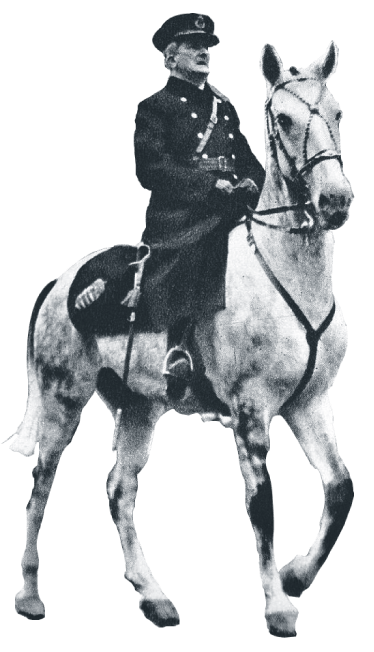 Both of these former Hungarian territories had large numbers of Hungarian-speaking people, who lined up in Hungarian folk costumes and cheered their Regent on.

Showing gratitude, Horthy’s government renamed the most prominent circle on Budapest’s famous Andrássy Street after Adolf Hitler. Too bad for Hungarian composer Zoltán Kodály, who was openly against Hitler, and who was living in a lavish apartment on the circle at the time... 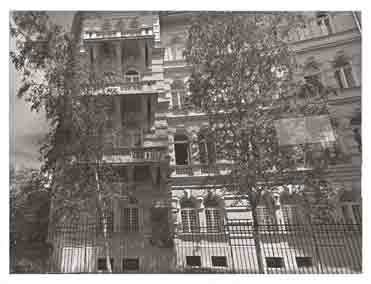 The famous circle would be changed back to its former “Körönd” in 1945 and then to “Kodály Körönd” in 1971.

Horthy enacted the Second Anti-Jewish law in May 1939.

This law defined Jews racially, similarly to the famous German Nuremberg Laws. Even those Jews who had converted to Christianity were now defined as Jewish based on the number of grandparents who practiced Judaism. And now that they were “Jewish,” they were forbidden to work in government or edit a newspaper, and were limited to only six percent in the following professions: film, theater, medicine, law, and engineering. They were likewise limited to only 12 percent in private companies. And Hungarian Jews also lost the right to vote.

Composer Zoltán Kodály publicly protested the law. His friend Béla Bartók was so disgusted he left the country permanently. Many other Hungarians—mostly members of the intellectual elite—also left Hungary at this time. Proud and torn. 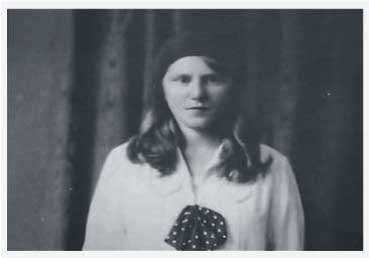 For this Jewish teen who lived in Marcali, life was increasingly rough. High school classmates threw stones at her and other Jewish children, crying out...

This was Marcali, the same town where my father, Gyula, and his sister, Ari, were thriving on a farm up the road. By now a number of Marcali youth wore swastikas on their sleeves. Teri was constantly threatened with violence, and sometimes these anti-Semitic peers beat her up. She fought back. Although everyone learned Martial Arts in high school, she was quite good, and it helped her to survive the daily attacks. 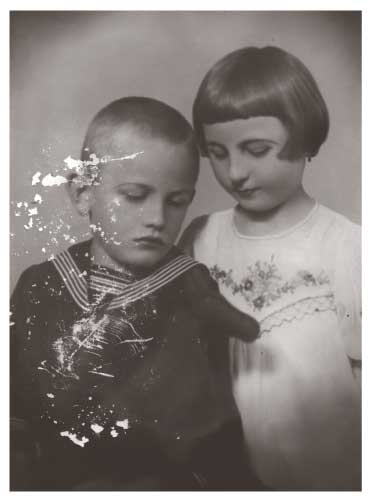 FORnon-Jewish Hungarians like Ari and Gyula, life proceeded more easily. If Gyula was bullied on his walks home from grade school, his older sister protected him by grabbing his arm and daring anyone to follow them (they were afraid because she was quick, hit people, and was a good scratcher). Once Ari noticed children sitting on a bench and saying mean things about Gyula, and she lifted the bench and knocked them all off.

Ari was spirited. Gyula was endlessly naughty. At home, he untied kitchen helpers’ apron strings and pestered his slightly older sister. At school, he pulled clumps of fur from the coat of his least favorite teacher. He had streaks of anger, but Ari was the one person who could not upset him. She was somehow exceptional and he loved her.

Their father, Pista, who had an 8th-grade education, placed a large bookshelf of classic Hungarian literature in the family living room. He had high hopes for his children, especially his son.