Proud & Torn: A Visual Memoir of Hungarian History is a 16-chapter, timeline-oriented history of Hungary that helps readers make sense of the dramatic and often horrific events that led one family—like Hungary itself—to be irreparably torn: two world wars, the Holocaust, and more than a century of instability with competing regimes of autocracy, fascism, democracy, and communism.

The story follows a sister and brother born in Hungary in the 1930s, and previous generations of their family. It provides a past context to many of the social processes underway in states where democracy and rule of law are being openly challenged. The narrative reminds us that hard-fought rights should not be taken for granted, for history has far too many examples in which they have been easily overturned.

Presented in a visual, interactive format and documented from the archives of personal, national, and world events, Proud & Torn brings history to life, and the family photos of everyday people make the history authentic and approachable (see proudandtorn.org/about). The format's captivating visuality also means it is accessible to young people.

The fully public, online project puts the Hungary of today in vivid context and is innovative as a digital history project on many levels:

Narrative. The family narrative perspective challenges the dominant and narrow portrayals of Hungarian and European history by placing a greater emphasis on rural and agricultural history. It’s the highly emotive survival story of one family in one country in the midst of world tumult. Focusing on a brother and sister, the project is inclusive of women’s experiences, adding a dimension that is often missing from historical narratives of Hungary. Through the personal, we understand the political dimensions of a larger history.

Visuals. The project enlivens history with nearly a thousand archival photographs, movie clips, animations, and graphics, many of which have never been published before, directly challenging the visual canon of Hungarian history. These elements are presented interactively via parallax scrolling to create an illusion of depth and a more immersive visual experience. Overall, Proud & Torn stylistically combines the genres of photomontage and graphic memoir in a digital platform.

Use of Archives. The project relies on over 40 different collections, many from amateur and underutilized archives. Key to our process is the use of Creative Commons archives like Fortepan (fortepan.hu); Proud & Torn is both a celebration and proof of the value of the CC archiving movement. We have also incorporated numerous family primary sources, with a nod to local resources and public history.

Chronology. We ground a complicated history in a timeline, making it immediately more contextualized. This timeline appears as a sweeping photomontage that visually displays the breadth of Hungarian history and links to the Prologue, Epilogue, and each of the sixteen dropdown chapters. Readers are welcome to skip around, or proceed through the narrative linearly. The chronological context, however, is always present.

Referencing. Every visual component (nearly a thousand images) is referenced to its source (see proudandtorn.com/references). The project thus provides a detailed template for best practices in referencing visual sources. This section also contains a bibliography of select historiographical citations. 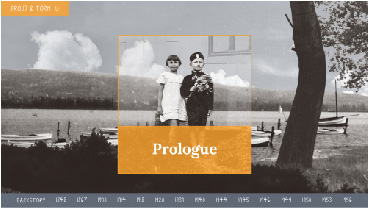 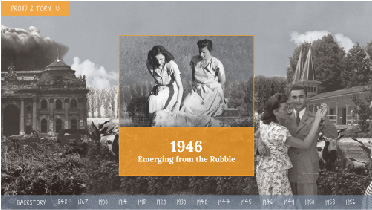 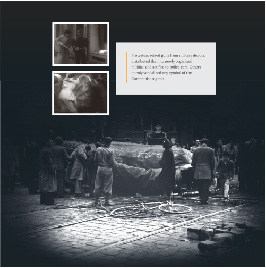 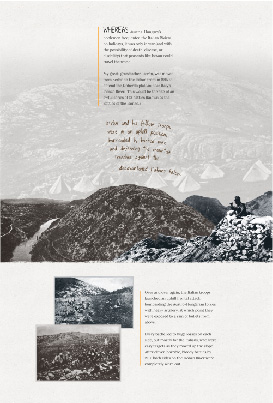 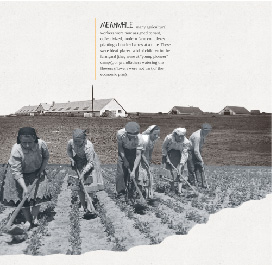 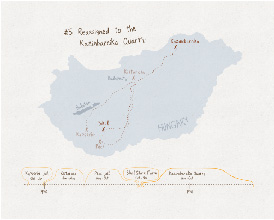 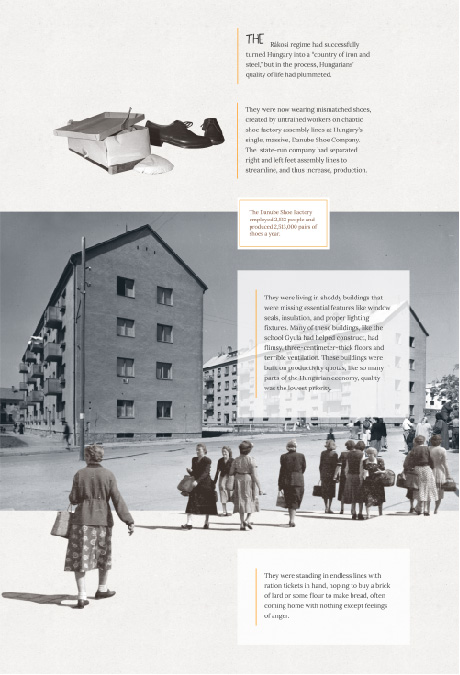 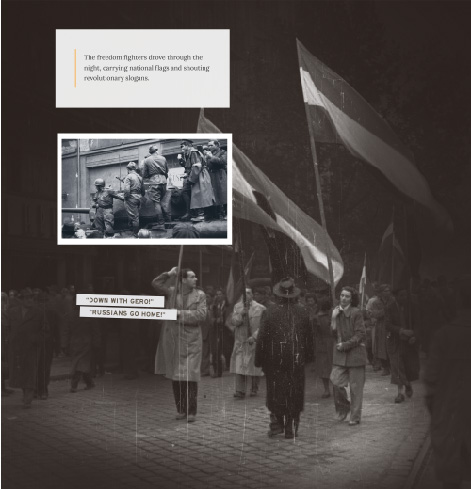 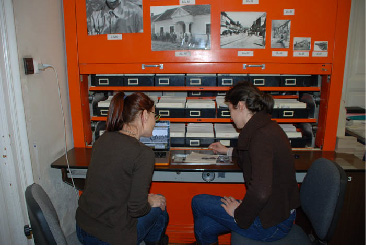 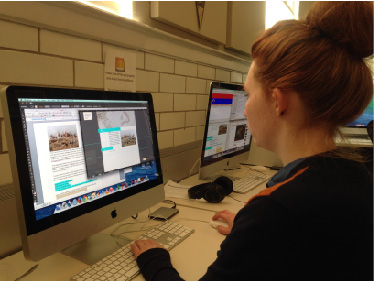 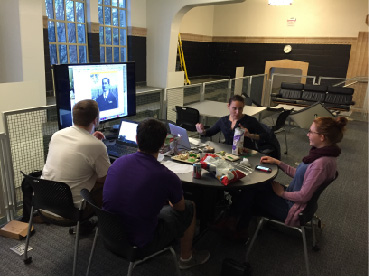 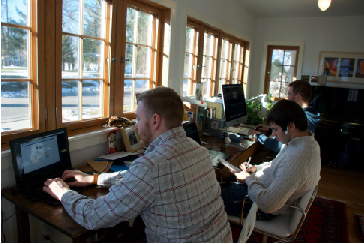 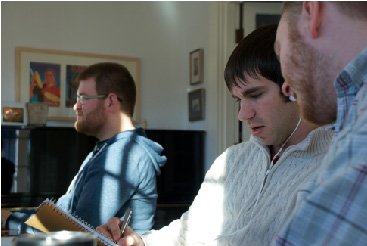 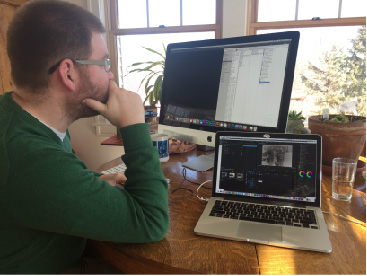 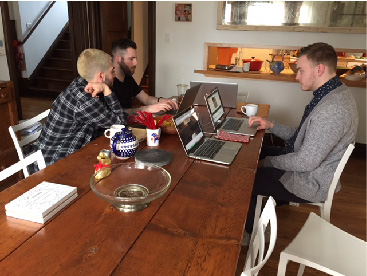 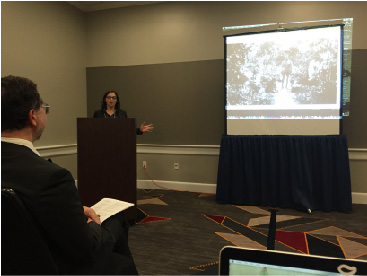 Backstory. “Backstory” details the story of Hungarians arriving to the Carpathian Basin and questions the myths that make up Hungary’s official narrative. It discusses the Fábos family’s geographic surroundings near Lake Balaton, where they worked the land as serfs on a noble Széchényi estate.

1848: Hungarian Spring.Throughout Europe, the huge inequalities between millions of destitute serfs and a small, powerful nobility lead to revolutions in 1848 and 1849. In Hungary, the 1848 Revolution is also spurred by Magyar nationalism and desires for greater autonomy from Austria. Even though the Habsburg Empire prevails, the Emperor concedes to some demands, ending serfdom and opening up land for some former serfs to farm. That’s how the Fábos family receive their land--a piece of swamp by Lake Balaton.

1867: Peasant Possibilities. Farming communities throughout Hungary (including the Fábos family) are buoyed by many new agricultural inventions and practices. As some peasant landholders become more successful, a new class system emerges. Meanwhile, Hungarian (Magyar) nationalism grows and, helped by Empress Elisabeth of Austria, leads to the formation of the “dual” Austro-Hungarian Empire in 1867.

1900: Millennial Modernity. A new agricultural work ethic emerges in the countryside, while Budapest explodes with culture, industry, and innovation. At the same time, a thriving Jewish financial class causes an already nationalistic Magyar nobility to become increasingly spiteful towards Jews and other ethnicities. Meanwhile, the Fábos family is able to buy drier land and get out of the swamp!

1914: Home Fronts and War Fronts. Large empires and smaller nation-states, engaged in a series of overlapping rivalries and alliances, dive into World War I. The Austro-Hungarian Empire relies most heavily on troops from the countryside; István Fábos is dispatched to the awful Doberdo battle in the Italian Alps while his wife, Regina, and son Pista take over the farm. István comes home alive, but with irreversible PTSD.

1918: Revolution and Counterrevolution. The horrors of WWI, combined with Spanish Flu and tuberculosis epidemics, food and labor shortages, and inflation, turn Europe (and Hungary) upside down. Hungarians hurl themselves into socialist and then communist revolutions, and then a Red Terror.

1920: Traumatic Losses. The Treaty of Trianon reduces Hungary to two-thirds its former size-- a punishment for the country’s alliance with Germany in WWI. Regent Miklós Horthy attempts to restore order by bringing back vestiges of the old class system. During the limited post-war economic recovery, the Fábos family manages to double the size of their farm in their town of Marcali. But the Horthy regime supports the White Terror backlash against communists, Jews, and women. Meanwhile, members of the Magyar elite become more actively anti-Semitic and nationalistic.

1930: Deal with the Devil. Gyula and Ari--the main characters in the Proud & Torn story--are born. Their family’s farm thrives even more with a new threshing business and profitable markets in Germany, while Hungarian leaders become increasingly cozy with Hitler in pursuit of gaining back lost territories.

1940: Wonderful, Murderous Continent. WWII arrives in Europe just as the Fábos family reaches the pinnacle of their wealth and status--represented by a new camera, a new car, and boarding school for Ari and Gyula. Meanwhile, Hitler rewards Horthy’s “friendship” with chunks of lost territory. Ari and Gyula’s father, Pista, is in the motorcade that recaptures Transylvania and Hungary passes three appalling and frightful anti-Semitic laws against Jews.

1944: Cataclysm. Germany invades its ally, Hungary, and with major help from Hungarian collaborators immediately take steps to annihilate Hungary’s Jews, including 184 Jews in the Fábos family’s home town of Marcali. By the end of 1944, Hungary’s fascist Arrow Cross control the country and WWII arrives at the Fábos family’s doorstep.

1945: Reckoning. The Soviets bomb Budapest to bits and fight some of their last battles against the Germans (called the “Balaton Offensive”) on the Fábos family farm. Hungary is liberated but occupied by the Soviet Red Army. It holds democratic elections and the Fábos’ favorite candidate, who supports private smallholder farms, wins a landslide victory.

1946: Emerging from the Rubble. Hungarian citizens face inflation and starvation, the Hungarian Communist Party rigs elections and takes political control, and the aristocratic class flees the country. Gyula attends agronomy school in a castle formerly occupied by the nobility, and Ari exchanges potatoes for silverware with the noble family that used to control her serf ancestors. It is the beginning of a new world order.

1949: Expropriation. The Communist Party authorities target the Fábos family farm, jail and tortured Gyula and his father, Pista, and imprison Pista indefinitely. This pattern of labeling landowners as “kulaks” and “enemies of the state” is repeated all over Hungary. Ari saves the day by stealthily encouraging her brother, from a window across the alley, to withstand the torture.

1953: A New Course. Hungarian Communists successfully dismantle private enterprise and disrupt the entire country’s economy. Backlash ensues and the Communists ease up on repression, but only for a short time. Fábos family members are assigned to work on a state farm, while Ari has new career opportunities in Budapest.

1956: Rise Up. Ari finds herself the midst of the Hungarian Revolution on the streets of Budapest as she makes her way home from the circus; Gyula experiences the revolution from the countryside, building Molotov cocktails to send to the capital. When the Russians crush the revolution, Gyula is forced to flee while Ari is forced (by her father’s orders) to stay back in Hungary.

Epilogue. Gyula travels by boat to America; Ari stays in Budapest. The two siblings lead separate lives on different continents, Ari as an artist for the Hungarian State Statistical Office and Gyula as a landscape architecture professor. Gyula occasionally visits Hungary with his American family and acquires land in the United States to compensate for the land that his family lost there. Despite the distance and the different hardships they endured, they remain best friends.

2018 Best of Web award, Association for the Education of Journalism and Mass Communication, August 2018 - FINALIST